It’s finally arrived: Tokyopop’s pseudo-documentary/ANTM hybrid show.  As expected, there are some aspects to AGO that are facepalm worthy.  The word “otaku” is used many, many times.  Almost in a dry-heave inducing amount.  And there are plenty of quotes and moments that just made me shake my head.  However, there are also scenes that are either informative or impressive.  Cringing certainly outweighed any other reaction in most of this episode, but Tokyopop at least didn’t make this a complete disaster.  Well let’s dive right in, shall we? 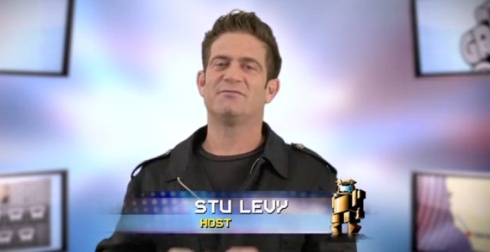 So the host of our journey through Otakuland is Stu Levy, founder and CEO of Tokyopop.  I don’t think I’ve ever heard of a CEO fronting a reality show.  There are multiple possible motivations for this: 1) Stu really appreciates Tokyopop fans and wants to show it up close and personal  –  2) Stu had too much time on his hands this past summer and wanted to get out of the office  –  3) Being the host allows Stu to be a ~star~ and avoid paying someone else to do it.  Etc, etc.

In the introduction, Stu gets real and lays out the definition of otaku for all to hear.  But then he backtracks and says that AGO will be about meeting “the opposite type” of otaku.  What?  That completely negates the point of the definition.  They can’t even say they’re reclaiming a word for themselves.  You can’t reclaim a word that was never your culture’s word to begin with.  Oh and Stu says that, “If you know the term [otaku], you probably are one, whether you admit it or not”.  Uh, no.  If I was every word that I knew, I could be a Tree Surgeon Cardigan King (as an example).  There’s also a moment when Japanese fashion is being described and Stu says, “…modern trends like cosplay, goth-loli fashion and kawaii”.  かわいい is an adjective, not a noun.  You may be trying to change otaku’s definition for Westerners, but I’m not letting this one slide, buddy.

Stu… come on, buddy.  You are a CEO in your 40’s.  Being a geek doesn’t mean that you have to look like shit.  Casual doesn’t have to equal crappy.  That hairstyle should have been retired 10 to 15 years ago.  You can relate to the youth without looking like you’ve been locked in a 90’s time capsule.

So Tokyopop held online auditions for a team of young anime fans that would help Stu travel across the country aboard a Tokyopop-themed bus in search of the greatest otaku.  The chosen otaku must have six core otaku qualities.  Six people were chosen and were creatively called… the “Otaku Six”.  I’m sensing a theme. 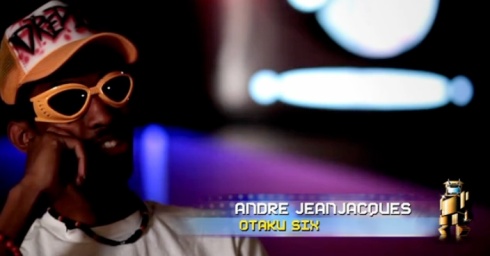 Andre’s like the Stevie Wonder of anime: He rarely, if ever, has his goggles off during filming.  I don’t know whether he’s trying to be like a shounen character or if that’s just his schtick. 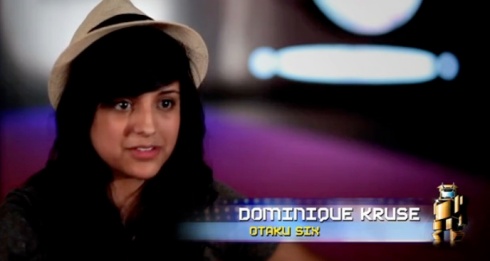 Dominique auditioned because she wanted to show her friends and family back home that anime/manga isn’t weird.  Yeah…I don’t think this was the best method to eaaaase them into the culture.  I was really hoping that one of these guys would say the proverbial “I’M NOT HERE TO MAKE FRIENDS” reality TV line, but no such luck.

Stephan’s blunt reason for joining the show is because otaku are generally people who aren’t physically attractive, so he wants to help prove that theory wrong.

You got your work cut out for you, kid.

This episode focuses on several otaku at Anime Expo in Los Angeles and San Fransisco.  Our first contestant is Ryan, a figure collector who has 10 to 20,000 items in his home.

I’m really hoping that the stuffed toys on his bed are just placed there because of the film crew’s presence.  You are beyond too old to be sleeping with a Card Captor Sakura plushie. 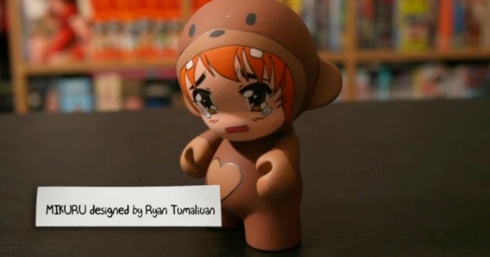 In a nice revelation, it’s noted that Ryan works as a toy designer and has done toys for Bratz, Naruto (for Mattel), and his own Mikuru figure.  Can’t say that’s flattering for Mikuru, but I guess not everything’s got to be a figure with upskirt poses.

He’s also created his own manga and online comic called Con-Goers.  Never read it, but I’m sure it’s got somewhat a following, so kudos. 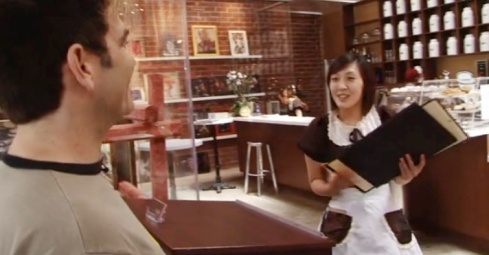 Next, Stu and the gang head over to Royal-T Maid Cafe in Culver City.  I really wanted to go when I was at AX a couple of years ago, but LA public transportation is a damn nightmare compared to East Coast standards.  The owner, Sue Hancock, says she’s looking for franchisees for the brand, so someone on the East Coast needs to pick up on this ASAP!  Unfortuately, my dream of creating a anime store/maid cafe small business is nothing but wishful planning for now.

Next up, we meet a cosplayer named Christine.  She likes cosplay because it’s a chance for her to let her inner sexiness come out.  She once wore her costume to a supermarket and all the boys wanted to take pictures with her.  That’s all fine and good, but you need to invest in better wigs.  Someone should have given you a mirror before you went on camera with that ratty mess.

She’s really good at creating her own costumes, and I like the detail she did for the pants of her Simca (Air Gear) character.

Christine goes on to explain how she makes USB earrings, so that in between classes she can watch her favorite anime shows. This could be cool if there was more design to the apparatus, but it just looks like you have USBs hanging from your ears.  Oh, and I love how she admitted in a not-so-subtle manner that she illegally downloads/copies anime, and Tokyopop is praising her method.  You dun goofed, Stu.

The show also interviews Erina Mano (who pimps her Twitter)…

…and shows Yoshiki/X Japan’s concert at Anime Expo.  I like that he put a huge label of his name on his piano.

Then the group heads to Hotel Tomo, which is a Best Western that’s Japanese themed.  Guests there can watch anime in the lobby, and get the Mecha Suite that has video game systems set up for your enjoyment.  If they really want to make the place awesome, they should make a bedroom with tatami mats and futons. 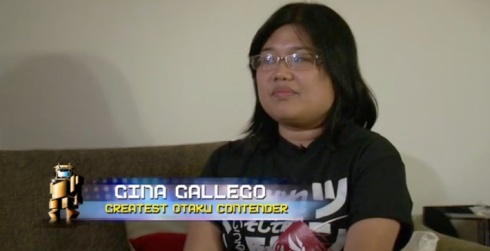 The third otaku contender of the episode is Gina, the female collector counterpart of Ryan.  She got into anime back when Sailor Moon aired and spends about $1000 a month on anime/manga related items.  She says that her collecting isn’t an addiction but IMO after a certain point, collecting is addiction in an organized manner. 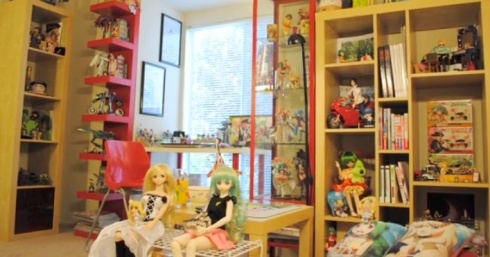 One thing I’ve noticed is that collectors really know how to get nice furniture.  For display purposes, of course.

This Nia (Gurren Lagann) doll cost 700 dollars.  And here I thought the Kara no Kyoukai $400+ Blu-Ray collection was priced egregiously. 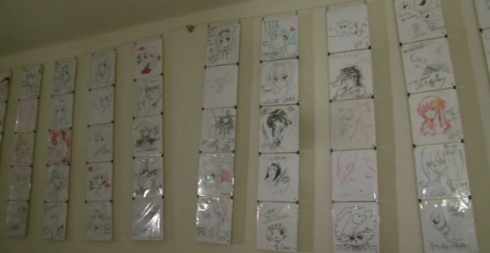 Gina’s also a autograph aficionado of sorts.  She’s collected signatures from Sailor Moon creator Naoko Takeuchi, and even got a signed copy by CLAMP of the Card Captor Sakura script.  I certainly wouldn’t mind that last item.

The next stop is the Cartoon Art Museum, which holds over 6000 art pieces and exhibits.  Most of the art seemed to be Western-based, but they talked about one instance where a Japanese-made version of the Batman comics by Jiro Kuwata was on display at the museum. 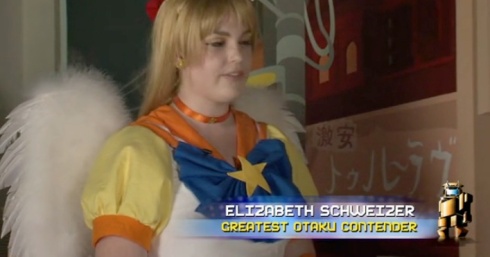 The last contestant of the episode is a cosplayer named Elizabeth.  Her love of cosplay has been “lifelong” as her mother made her a Sailor Moon costume when she was 5.  Sailor Moon seems to be the main theme with all of these people, right?  Anyhow, she’s really into creating her own costumes and has made 20 in the past 3 years, which is pretty impressive for the craftsmanship that she’s done. (And yes, this screenshot is derpy but Hulu’s video player is a bitch for my computer and I just wanted to finish.)

What really got my attention is how on point her wigs are.  Christine needs to get some tips from Elizabeth.  She said that got her Cure Pine (Pretty Cure) wig that color by using a mixture of ink, alcohol and water to get the exact color of the character’s hair.  Elizabeth is also involved with a community group in Japantown, LA that sings Japanese songs.  Her Japanese pronounciation is pretty good, and it makes me wonder whether she just memorizes the lyrics or knows the language.

Lastly, Elizabeth presents some of her “manga” artwork and states that she just needs a good writer to match up with her drawings.  Yeahhhh…you might want to brush up on your skills a bit more before you look for a writer.  Just sayin’. 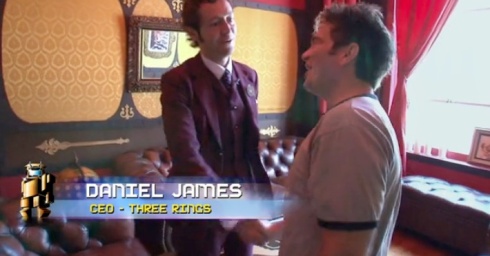 The final segment involved an interview with Daniel James, CEO of Three Rings and creator of the Puzzle Pirates MMO game.  I have no idea why they included this, because it has nothing to do with anime, manga or Japan from what I could see.  Well the Three Rings office is cool looking.  And he’s wearing a three piece suit.  I guess there’s that.

So yeah, a lot of awkward moments in this series already but I enjoy the spotlight on tourist spots, such as Royal-T and Hotel Tomo.  Out of the four contestants so far, I think I’d like to see Ryan or Elizabeth win.  Vote below for your favorite:

This entry was posted on Saturday, February 26th, 2011 at 5:42 pm and posted in America's Greatest Otaku, Live Action. You can follow any responses to this entry through the RSS 2.0 feed.
« AKB49 – Renai Kinshi Jourei Manga
Maaya Sakamoto’s Official Youtube Channel »